As you have probably already realised, I’m a fan of the game Bioshock Infinite. If you hadn’t realised that, you may want to check out Praise The Songbird. One of the other collectible options that came out of this game is, of course, the Vigor bottles. If you’re not familiar with the game, Vigors are bottled liquids collected throughout the game. The use of a Vigor gives you an ability, such as throwing fire, controlling water, or sending crows to peck your enemies to death.

It is possible to purchase replicas of the bottles online, but being me, I decided that I would just try to make one myself. As with the Songbird, this was not something I had attempted before, so I was essentially making it up as I went. (But, let’s be honest, that’s part of the fun.)

I decided to make the Undertow bottle, which grants the user water controlling powers. Whilst Undertow was not my favourite Vigor in the game, it was probably my favourite bottle.

Step 1 was to find an appropriate bottle to use as my base. It will surprise no one to know that I chose Bombay Sapphire. I bought the small 200ml bottle and removed the label.

And yes, I bought a small Baileys too, with the intention of keeping it aside for another Vigor. But, let’s just focus on the Undertow for now.

Following that, I cut out a paper stencil and wrapped it around the bottle. The stencil was cut on the fold so each face was symmetrical. I traced around the stencil with a marker (testing first on another bottle to make sure that the marker would write on glass, and could be cleanly removed at the end).

Then the fun stuff began. I had heard of Polymorph Beads before, but I had never used them. This stuff is brilliant. It’s durable plastic with a very low melting point. To use, simply pour hot water (above 60° C) into a bowl and drop a spoonful of polymorph beads in. The beads turn clear when they are soft. You can then scoop them out and mould by hand.

I started by rolling the plastic out into snakes and laying these directly onto the glass to form tentacles. It took a few attempts to get them the right size and shape, and to stay in place while they hardened. I also had to work in layers to make sure they overlapped in the right places.

Once the tentacles had hardened (just by allowing them to cool to room temperature), I started working on the face. Again, I built this up in layers to give the detail and raised effects. Any time the polymorph got too hard to work with, I would heat it with a hair dryer to make it soft again. I was actually able to shape and reshape entire sections multiple times by either using water or the hair dryer.

Then, it was also time to make the stopper for the top. I found an old wine stopper which had come in a Christmas cracker and ripped the plastic star off the top. Then I made my own little tentacle stopper set into the rubber fitting. 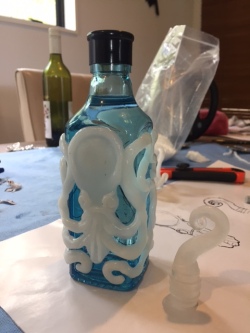 I removed the whole thing from the bottle next (making sure it was properly set first). The polymorph stuck to the glass while it was soft, but once it set it was easy to lift it off and slide the entire piece off like a sleeve. My plan was to do some sanding/carving of detail, but this turned out not to be easy to do on plastic. Instead I set polymorph beads into the face to create a rim around the head. I also set beads along the tentacles, then softened them with the hair dryer, and used the tip of a pencil to make an indentation in each. Ta-da: suckers. 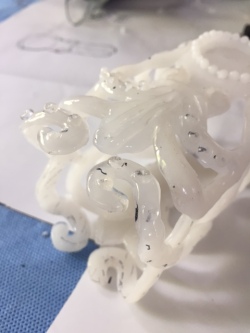 Up next was painting. I applied a layer of white acrylic paint over the whole thing first as a primer. The paint actually adhered to the plastic quite well, so there were no difficulties there. Then I added the main layer, first with a brush – to get into all the little gaps and creases – and then a top layer with a sponge. This gave a nicer texture to the paint, and removed any brush marks.

I also used the brush to add a little more shading to the face to emphasise the details, and add some brightness to the eyes.

The final detail was to paint the Undertow logo image onto the head of the octopus. As the design is symmetrical, there needed to be an identical painting on the back as well. I did these by hand with a brush and acrylic paints. Admittedly, they are not perfectly identical, but given that you never see them side-by-side, I don’t think it really matters.

The last step was to apply a coat of spray varnish to the whole thing, to ensure the paint wouldn’t chip or dissolve if it got wet. I used a matte varnish over the main area, but applied a few coats of clear nail polish to the logo image, so it has a gloss appearance. Then, once everything was dry, it was time to reassemble. 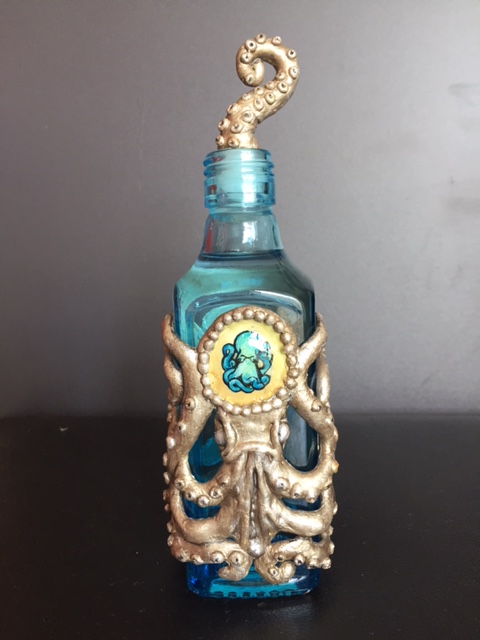 One thought on “Wash Away Your Enemies”